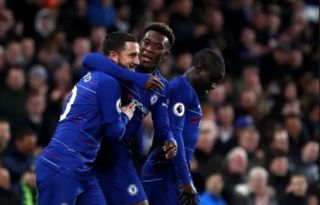 Chelsea are reportedly confident of tying Callum Hudson-Odoi down to a new contract in the coming weeks after plenty of unwanted speculation over his future.

The England international endured a frustrating season under Maurizio Sarri, despite eventually seeming to win the Blues manager round and gain more playing time in the first-team.

MORE: Club prepare to lose manager to Chelsea as they line up replacement

Clearly a huge talent, Hudson-Odoi has already attracted links with a number of big clubs, most notably Bayern Munich.

ESPN claimed a couple of months ago that the 18-year-old remained keen on leaving Chelsea after bids from Bayern in January, while Goal have also linked the teenager with Manchester United.

However, the Daily Mirror now report that CFC could tie Hudson-Odoi down to a new deal in the coming weeks, despite continued interest from Bayern as they need to replace departing club legends Arjen Robben and Franck Ribery this summer.

United could also have done with a quality winger like Hudson-Odoi in their ranks as an upgrade on the under-performing Alexis Sanchez and Anthony Martial.

They have instead been linked with Daniel James as a cheap alternative by the Evening Standard, who also state Jadon Sancho was considered but looked too expensive.

Keeping Hudson-Odoi could be vital for Chelsea as they face a potential transfer ban this summer, while the Independent continue to link Eden Hazard with Real Madrid.