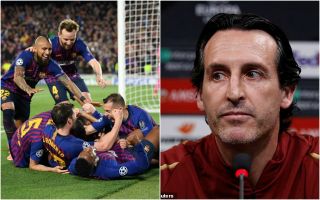 Arsenal are reportedly one of the clubs interested in a potential transfer swoop for Barcelona right-back Nelson Semedo.

The Portugal international has not been at his best since joining Barca from Benfica two years ago, and his stay at the Nou Camp could be a short one.

MORE: Decision made: Club to make move to complete transfer of Arsenal ace

Mundo Deportivo have reported on Semedo being unsettled at the club due to his role under Ernesto Valverde, and Don Balon have followed that up by listing the teams interested in the player.

Don Balon claim Atletico Madrid are showing the most interest in the 25-year-old at the moment, but that Arsenal and Juventus could also be in contention.

The Gunners could definitely do with more options at right-back after Stephan Lichtsteiner’s departure on a free transfer, while Hector Bellerin has had his problems with injuries.

Nicolo Schira, via the tweet below, has also claimed Arsenal are trying to sign Paris Saint-Germain’s Thomas Meunier for that position, but Semedo’s potential availability could make him another decent option.

#Arsenal are in advances talks with #PSG for Thomas #Meunier. #Gunners have offered 5-years contract to him. Now two clubs should finalize the deal. #transfers #AFC