Chelsea boss Maurizio Sarri will hand Gonzalo Higuain another chance at Juventus if he takes the managerial reigns at the Allianz Stadium.

According to The Sun, the Italian head coach has been touted to succeed Massimiliano Allegri at Juve, one week after guiding the Blues to a Europa League triumph.

Sarri replaced Antonio Conte at Stamford Bridge last season and in addition to winning his first major trophy as a manager, he also led Chelsea to third place in the Premier League.

However, it now looks likely he will move on after just one full season in England, having already been given the green light to depart by Chelsea officials.

According to Goal, Sarri will make sure Higuain follows him back to Italy if he takes over at Juventus, with Mario Mandzukic likely to be sold.

Higuain has spent the last six months on loan at Chelsea, following a loan spell at AC Milan during the first half of the campaign and he managed to score five goals in 14 Premier League appearances.

The Argentine is still technically a Juventus player, but he decided to seek regular football elsewhere after Cristiano Ronaldo’s arrival in Turin last summer. 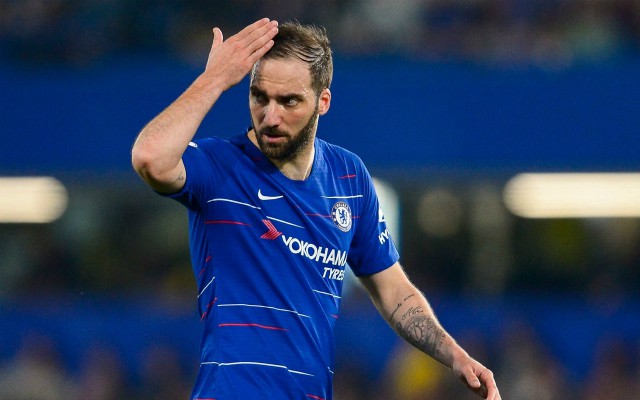 Gonzalo Higuain in action for Chelsea

Sarri has a strong relationship with Higuain, having previously coached him at Napoli and he wants him to lead the line for the Bianconeri next season if he is named as the club’s new manager as expected.

This latest news will surely come as a blow to Chelsea given their lack of options up front, especially with a two-window transfer ban looming.

Higuain has not set the world alight in England, but he has shown off his impressive movement upfront and eye for goal while working hard to stay in Sarri’s starting line up.

It now looks as though Chelsea will not be given the chance to extend the 31-year-old’s stay in west London, which is more bad news for the club as Sarri edges closer to the exit door.