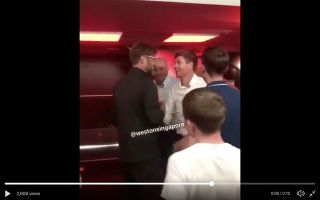 Liverpool fans will love to see this beautiful moment from the Reds’ party celebrating their Champions League triumph against Tottenham in Madrid.

Just when you think it can’t get any better for Liverpool fans after their sixth Champions League victory against Tottenham, Reds fans were treated with this lovely moment between Liverpool legend Steven Gerrard and manager Jurgen Klopp.

After bumping into each other, the pair hugged one another and in turn, melted the hearts of the Anfield faithful.

Check out the video that has set Liverpool fans’ heart racing:

Liverpool were amazing last season, the Reds’ will be hoping to take the momentum from their Champions League triumph into next season, will Jurgen Klopp’s side go head-to-head with Pep Guardiola’s Manchester City for the Premier League title once again?