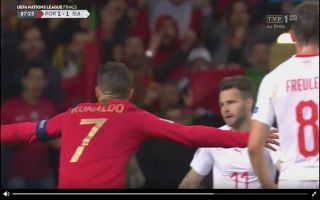 Juventus superstar Cristiano Ronaldo has fired a hat-trick against Switzerland to seal a place in the Nations League Final. What a performance from Ronaldo.

In the 87th minute of the tie Ronaldo scored a late winner for Portugal, the former Manchester United and Real Madrid star produced a tidy finish after Wolves star Ruben Neves played a superb ball into Manchester City superstar Bernardo Silva who teed up Ronaldo with a inch-perfect pass.

Juventus’ talisman made it 3-1 to his country just two minutes later, Portugal pounced on an error by Arsenal ace Granit Xhaka and attacker Goncalo Guedes charged forward before laying the ball off to Ronaldo.

The five-time Ballon d’Or winner used his signature stepovers to dribble past Manuel Akanji before firing the ball into the bottom corner.

Check out Ronaldo’s winner below:

Ronaldo with the late winner to put Portugal in the UEFA Nations League Final! pic.twitter.com/W0P8kPkDk5

Check out Ronaldo’s strike two minutes later to make it 3-1:

Cristiano Ronaldo wasn’t the best player on the pitch tonight, but the biggest players are capable of producing the biggest moments. He remains so fluid and so, so effective. A brilliant goal.pic.twitter.com/PALMCLWRYI

Should England overcome the Netherlands tomorrow night, Gareth Southgate will have to somehow think of a masterplan to stop the beast that is Ronaldo.