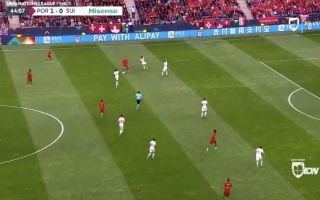 Portugal captain Cristiano Ronaldo put Joao Felix through on goal with an amazing pass against Switzerland in the UEFA Nations League semi-finals.

The scoreline is currently 1-1 early in the second half, with a stunning Ronaldo free-kick giving the host nation the lead in the first period, before Ricardo Rodriguez’s penalty levelled the match on 57 minutes.

Ronaldo has been in the mood tonight as Portugal have created a number of clear openings, with a place in the final against either England or the Netherlands up for grabs.

The Juventus striker sliced the Swiss defence open with a sensational no-look pass to Joao Felix just before the interval, but the Benfica teenager failed to convert with the goal at his mercy.

Check out Ronaldo’s incredible vision and pass execution below, via Twitter.

TBF this no look pass from Ronaldo is filth ? Shame Joao Felix couldn’t finish it. Would have been a classy HT Goal & Assist from CR7 #NationsLeague #PORSUI pic.twitter.com/7MeCkdmOfj