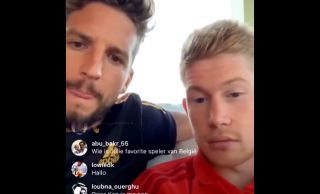 Manchester City star Kevin De Bruyne made a jokey reference to Eden Hazard being close to leaving Chelsea for a transfer to Real Madrid.

By all accounts, the 28-year-old should soon leave the Blues for Real, with BBC Sport and numerous others reporting on the deal being close to completion.

De Bruyne: “In Madrid for sure…” pic.twitter.com/HfN3Mxo12A

And in the video above, De Bruyne sits down with Dries Mertens during Belgium duty to talk with fans, one of whom asks where Hazard is.

To which, De Bruyne simply responds ‘in Madrid for sure’ before cracking up with laughter.

The 27-year-old had a spell at Chelsea earlier in his career so might not be too popular with comments like this as he seems to be amused by the prospect of Hazard leaving Stamford Bridge.