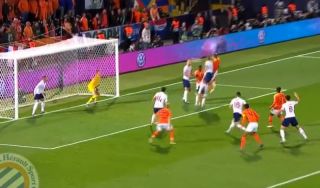 Ajax defender Matthijs de Ligt showed why he’s a man in demand with a superb response to his mistake earlier in tonight’s game against England.

The Netherlands’ rising star has just scored a quality header from a corner to equalise in this Nations League semi-final match, with video below:

De Ligt scored a couple of fine goals in the Champions League this season as well, helping Ajax as far as the semi-finals after some major upsets against Real Madrid and Juventus.

The 19-year-old gave away a penalty in the first half tonight to have some reactionary fools dub him the ‘Dutch Phil Jones’ at half time, but he’s now had a positive impact on tonight’s game.