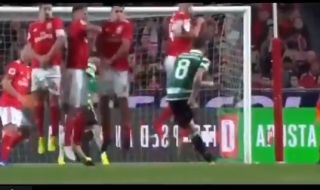 Bruno Fernandes’ stats and video highlights have got these Manchester United fans very excited as transfer rumours hot up about him possibly being closer to a move to Old Trafford.

The Portugal international has just had a superb season for Sporting Lisbon, and that’s led to growing talk of interest from big clubs.

The latest from A Bola, as translated by Sport Witness, is that United have requested talks over a potential £71million transfer – a fee the club are tipped to accept.

Fernandes seems an ideal fit for United in a problem position, with Paul Pogba not really performing, while Ander Herrera is leaving on a free transfer this summer.

Here’s a video of the 24-year-old doing his thing, and we have to admit, we’re converts as well!

We need this genius. He’s a baller, stretching legs like Ronaldo!

Jeez those are some crazy stats

His shooting is very accurate

A joy to watch