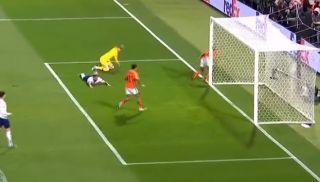 England have gone 2-1 down against the Netherlands in the Nations League semi-final tonight thanks to a dreadful own goal by Kyle Walker.

While Walker himself got the finishing touch on this goal for Holland, it’s really the whole build-up play at the back from England that makes this so painful to watch, with John Stones in particular putting the defence under pressure with his poor passing.

The Three Lions were really not at their best here and gifted the Netherlands their goal that will surely now send them into the final against Portugal.

Marcus Rashford had given England the lead in the first half but they’ve thrown it away here with a poor second half performance.