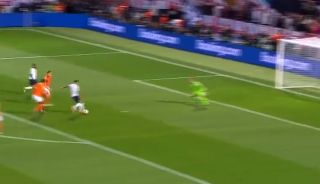 Manchester United winger Jesse Lingard scored a superb late goal for England against the Netherlands…before VAR decided it was offside.

In fairness, it looks like he probably was, though it’s a shame to see such a fine team move and finish go without reward.

England had gone 1-0 up through another Man Utd star, Marcus Rashford, via the penalty spot in the first half.

However, Matthijs de Ligt has since equalised for Holland and we could be heading for extra time in this Nations League semi-final.