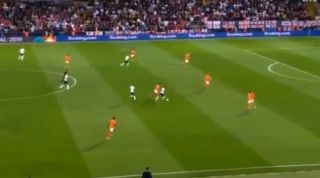 Raheem Sterling momentarily thought he’d just robbed the ball off Virgil van Dijk during the game between England and the Netherlands.

Van Dijk quickly put things right, however, as he effortlessly won the ball right back off the England winger with some typically masterful defending.

look what van dijk did to sterling pic.twitter.com/OLWqG2XBcN

The Liverpool defender played in a Champions League final only five days ago, so could be forgiven for a slightly sloppy display, but he was on form again to help his country to a 3-1 victory.

These Reds fans loved seeing Van Dijk get one over their former player, with some reaction below…

Is it just me or does Van Dijk go extra hard on Sterling whenever he plays him?

Van Dijk sending sterling sideways after 4 days on the lash and hardly any sleeep ??

“watch him defend and we watch him score” ? #LFC https://t.co/ayh6zV8bqU

Piss him off once and you’ll get fucked pic.twitter.com/Sev2GBgNoE

So Van Dijk picked Sterling and threw him away? ???