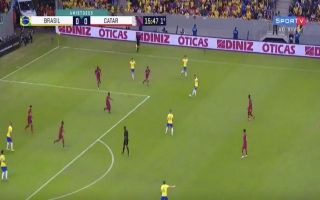 Everton striker Richarlison showed exactly why he is on Manchester United’s radar by finding the net for Brazil against Qatar on Thursday.

According to Metro Sport, the 22-year-old has been touted for a summer switch to Old Trafford after his impressive first season at Goodison Park.

Richarlison contributed 13 goals and one assist in 35 Premier League games to help Everton finish eighth in the final table, earning himself a place in Tite’s Brazilian squad for the 2019 Copa America in the process.

The mercurial forward justified his transfer links to Man United with a superb headed goal during Brazil’s 2-0 win over Qatar – meeting a perfectly flighted Dani Alves cross to open the scoring in the midweek international friendly.

Richarlison also set up Manchester City star Gabriel Jesus to complete the scoring and if he continues to shine for the Selecao, speculation over his future at club level will rise with the transfer window now open.

Check out his perfectly executed header below, via Twitter.