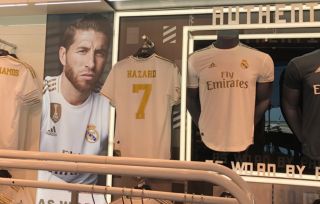 The transfer saga surrounding Chelsea winger Eden Hazard seems to be finally coming to an end, and it looks as if Los Blancos may have jumped the gun in regards to the transfer.

As per the Telegraph, Hazard looks set to seal a move to the Santiago Bernabeu in a deal worth £130M this summer, with the Belgian’s future finally being resolved.

And by the looks of it, Real are so confident that the move will get done, they’re already selling shirts with ‘Hazard 7’ on the back in one of their official club shops.

As seen below, pictures have emerged on Twitter of Real selling the shirts in one of the club stores, something that suggests this move is basically as good as done.