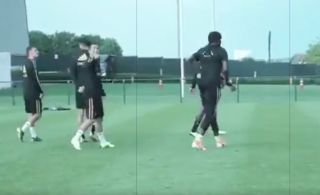 Eden Hazard was heard speaking Spanish during Belgium training today, as the player looks to be preparing for his proposed transfer to Real Madrid this summer.

As per the Telegraph, Hazard is set to seal a move to Real this summer after the two clubs agreed a £130M deal for the Belgian, and by the looks of this video, the winger is prepping himself for live in Spain already.

As seen above, Hazard was heard saying “gracias a todos” to the press, something that translates to “thank you all” in English.

Is this is a sign that Hazard is certainly move to Real this summer? It definitely seems like it…