Arsenal will have to battle one of their London rivals, as well as several clubs from Spain, in order to secure the signing of this talented La Liga midfielder.

According to Marca via The Sun, Arsenal and West Ham are both in the race to sign Eibar midfielder Joan Jordan, the central midfielder is also being courted by Sevilla, Valencia and Villarreal.

Marca understand that Sevilla are currently in pole position to sign the 24-year-old, with The Sun reporting that the Andalusian club have offered the ace a five-year deal.

With no clubs yet to agree a transfer fee for the midfielder, the hunt to sign the Catalonian is still wide open. 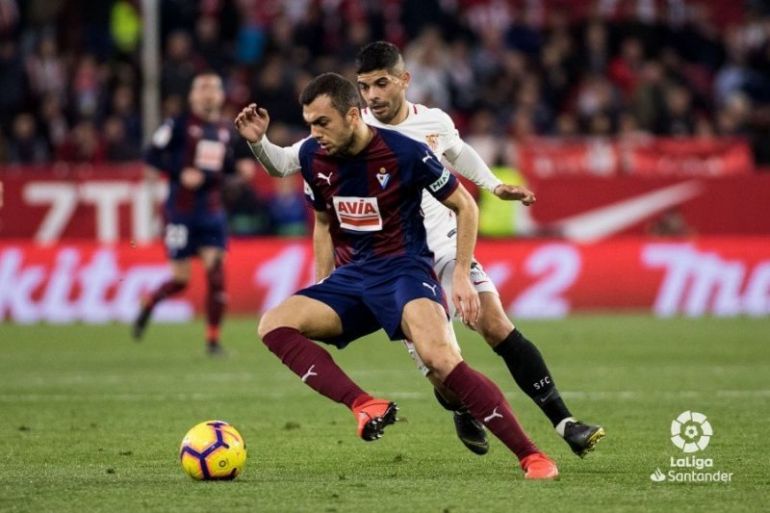 Jordan in action for Eibar this season.

West Ham are understood to be Sevilla’s primary rivals for Jordan’s signature, Arsenal should look to make an offer for the ace very soon or run the risk of losing out on a potential bargain buy.

Jordan has a release clause of just £13.25m (£15m), however, Eibar are willing to settle for less as Jordan has just one year remaining on his contract and Eibar are looking to cash in on the star, protecting them from potentially losing the ace for free next summer.

Jordan is naturally a traditional all-around central midfielder but the ace featured in a defensive-midfield and attacking-midfield role on a handful of occasions last season. For less than £13.25m, Jordan could be a quality addition to the Gunners or Hammers squads.