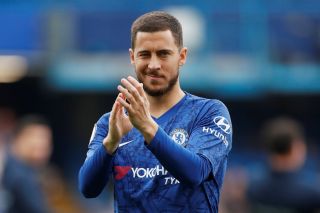 After his move to Real Madrid was confirmed on Friday, Eden Hazard has bid an emotional farewell to Chelsea on Facebook after a wonderful seven-year spell at the club.

As noted by BBC Sport, the 28-year-old has seen the two clubs reach an agreement over a transfer with a £150m+ fee being touted as he will now begin a new chapter in his career.

It comes after a glittering spell at Chelsea though, with Hazard scoring 110 goals in 352 appearances for the Blues, while winning two Premier League titles, the FA Cup, League Cup and Europa League twice during his time with the club.

In turn, he would have undoubtedly built a strong relationship with the fans during that period, as he undoubtedly established himself as one of the top players in Europe as he matured and developed his game at Stamford Bridge.

However, as noted in the link in his tweet below, Hazard has now had to say goodbye to the Chelsea faithful and has written a classy open letter to the club and fans to thank them for everything and to explain his decision to move on.

“Now it’s in the open I would like to put on record one thing was always clear to me, I have loved every moment at Chelsea,” he wrote.

“Chelsea and especially Chelsea fans will always be special to me and next season I will look for your results first. I wish each and every one of you the very best my friends.”

He was keen to show his appreciation to all those at Chelsea, and given the positive nature of the responses to the post, it’s fair to say that his decision to move on hasn’t tarnished his reputation or popularity with many fans who while being disappointed over his exit, seemingly understand the reasoning behind it.

Time will tell how Chelsea cope without him next season, but Hazard will now begin to look forward to an exciting new challenge as he links up with Zinedine Zidane at the Bernabeu as Real Madrid look to bounce back from a bitterly disappointing season last year.

A message to my Chelsea friends and family https://t.co/qRF0Q5dguN