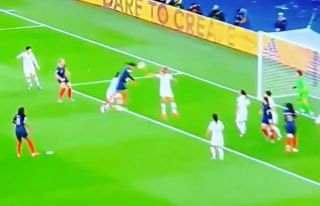 France kicked things off in the 2019 Women’s World Cup with a 4-0 win over South Korea on Friday night, making an early statement of intent as hosts.

It was a thoroughly impressive way to get their tournament underway, with a double from Wendie Renard and goals from Eugenie Le Sommer and Amandine Henry securing the win.

Both Le Sommer and Renard were selected in our top 10 players to watch, as seen in the link above, and they certainly didn’t disappoint in the opener.

Such was her commanding ability in the air both defensively and in attack as well as her overall game, many couldn’t help but draw a direct comparison between Renard and Liverpool defender Virgil van Dijk.

There is no doubt the pair share similar characteristics and as seen in the selected tweets below, it’s certainly meant as a major compliment to both rather than a lazy comparison.

It’s nothing new for the 28-year-old though, as she’s bagged 67 goals in 254 appearances for Lyon, while she now has 20 goals in 108 caps for France as they are certainly using her height to their advantage and she will remain a huge threat moving forward.

Can you imagine Van Dijk and Renard at the back?

It’s like watching Virgil van Dijk.
Renard, a central defender with two goals in the first half. #FIFAWWC2019

#FIFAWWC Renard. Is top class, and has a presence like Virgil Van Dijk at Liverpool #FIFAWWC.

That French women’s centre back Renard is the women version of Virgil Van Dijk.

France’s Wendie Renard is fucking superb! Strong, dominant, fearless. It was like watching a badass femme version of Virgil Van Dijk. In fact, going forward, whenever I watch VVD, I’ll be watching the dude version of Renard.

Watching the Women’s World Cup. We could really use a Center Back like Wendie Renard. The French Virgil Van Dijk #signherup #Arsenal

Anyone else watching #WWC2019 think Wendie Renard plays and looks like Van Dijk? ?

Experienced centre-back Wendie Renard is like the Virgil van Dijk of the French team.

Her last international goal before this match was an injury time winner against England in the 2017 SheBelieves Cup. pic.twitter.com/QyACXSO0EW