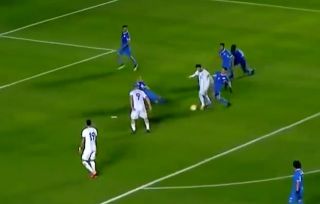 Argentina warmed up for the Copa America with a 5-1 win over Nicaragua on Friday night, and it was Lionel Messi leading their charge.

Not content with bagging 51 goals and 22 assists in 50 appearances for Barcelona this past season, the 31-year-old looks in the mood this summer as he hopes to lead Argentina to success.

As seen in the video below, he produced a moment of brilliance in the win over Nicaragua in a friendly as part of their preparations for the tournament, as he danced his way through the defence before producing a superb finish.

Messi scored a brace while Lautaro Martinez helped himself to a double too with Roberto Pereyra also getting on the scoresheet in an impressive win for Lionel Scaloni’s side.

However, it’s one thing doing it in a friendly against Nicaragua and another doing it under pressure in a big tournament, and they will hope that they can deliver this time round and secure Copa America glory.

The tournament gets underway next Saturday when hosts Brazil take on Bolivia, while it ends with the Final on July 7, with Messi undoubtedly hoping that Argentina will be featuring in it.

With more goals like this one, it will hard to stop him and the Albiceleste.

? — They have families, Messi.