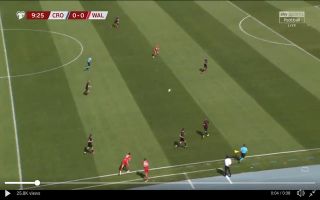 Bale produced the eye-catching moment just nine minutes into the clash, the winger grabbed the ball and launched a tremendous long throw-in towards goal, Bale somehow managed to throw the ball from just past the halfway line to the edge of the box. Astonishing.

Bale provided Liverpool youngster Harry Wilson with a glorious chance at goal, but the ace fired the ball straight into the goalkeeper’s hands.

Check out Bale displaying his incredible power below:

???? – Gareth Bale throws the ball harder than some can kick it!

His monster throw-in puts Harry Wilson through on goal, but his shot is straight at the 'keeper! ?

Bale will be looking to show off the new trick he’s got up his sleeve next season, the superstar will be hoping to win over Zinedine Zidane in pre-season and win himself a place in Madrid’s starting lineup alongside recently signed star Eden Hazard.