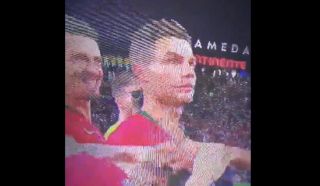 Cristiano Ronaldo did not exactly look thrilled as Bernardo Silva won the player of the tournament prize for the Nations League.

Given that the Juventus forward scored a hat-trick in the semi-final win over Switzerland, it’s perhaps not too surprising that he felt he should’ve been in with a shot.

Look how happy “the leader” was when Bernardo got announced as the POTT ? pic.twitter.com/0Wovx7tZj7

However, Manchester City playmaker Silva was immense in the final win over the Netherlands, as he has been in general all season long.

It certainly looks like Ronaldo shakes his head at the announcement here before staring coldly into the distance.

The 34-year-old has the reputation for being a little petulant about these things, though others would just say he’s fiercely competitive and that has helped make him the great player he is.

Still, he could surely show a bit more appreciation to his team-mate here after his role in tonight’s trophy win?