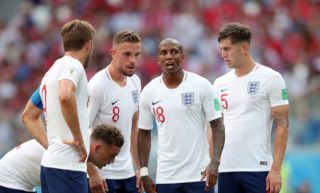 England take on Switzerland in the third-place play-off for the 2019 Nations League this afternoon, as the Three Lions look to end this season on a high.

Gareth Southgate’s side take on the Swiss in Portugal on Sunday afternoon, a match that comes just days after they suffered a heartbreaking 3-1 defeat to Ronald Koeman’s Holland.

England will be looking to end a really positive last 12 months on a high by winning this afternoon, something that would see the Three Lions secure a third-place finish from the first ever edition of the Nations League.

Harry Kane has been elected to lead the line for England, with both Raheem Sterling and Jesse Lingard starting on either flank.

Both Danny Rose and Trent Alexander-Arnold have been handed starts as well, with the duo replacing Ben Chilwell and Kyle Walker at the back.

John Stones has also been dropped following his below-par performance against Holland, with Liverpool ace Joe Gomez taking his place.

You can check out the full England line-up below.

Any surprises you see in there? Let us know down below.

Here it is: the #ThreeLions team for today's clash with Switzerland! pic.twitter.com/GzZxJhx9Ne