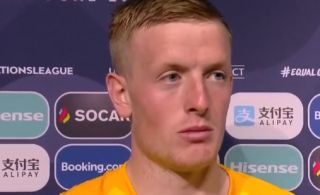 England goalkeeper Jordan Pickford has explained the preparation that went in to his brilliant penalty in today’s Nations League shoot-out win over Switzerland.

The Everton shot-stopper stepped up and fired home a beauty of a spot kick to help the Three Lions to victory in this third place playoff, and he admitted afterwards it was his first such strike in a competitive game.

"I'd never taken one in a real game!" ?@England's shootout hero Jordan Pickford speaks to @skysports_PatD after becoming the first 'keeper to score a penalty for the Three Lions in a competitive shootout. pic.twitter.com/rGVXJ7yd2V

However, Pickford did say that all players practice penalties in training during major tournaments, so are all fairly well prepared to step up if required.

It’s not clear where Pickford would have been in the pecking order if the likes of Harry Kane had been on the pitch, but he did say he was ready to take one, and so he showed!