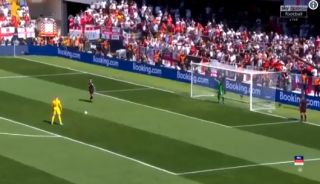 Jordan Pickford takes a pretty decent penalty, it turns out, with the Everton and England goalkeeper playing a starring role in this penalty shoot-out win over Switzerland.

The victory sees the Three Lions finish third in the Nations League after a pretty dire game, truth be told, which finished 0-0 after extra time.

Jordan Pickford took that penalty like he was Ronaldo? pic.twitter.com/JkkekjAQQy

Still, Pickford produced two moments of quality in the penalty shoot-out to ensure England came out on top, with his excellent spot kick in the video above.

No wonder it went in as he used the classic Cristiano Ronaldo power-stance as he stepped up to take it!

Then he got back to doing normal goalkeeper things with this fine save below:

Brilliant save from Pickford to win it pic.twitter.com/fayJkd9ERy