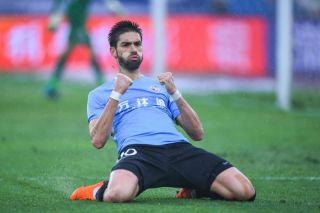 Belgian winger Yannick Carrasco has provided an update on talks over his transfer away from Chinese Super League club Dalian Yifang as he’s strongly linked with Arsenal.

Reliable journalist Nicolo Schira has tweeted that Carrasco is in advanced talks over a move to the Emirates Stadium this summer, having also been targeted by Unai Emery back in January.

#Carrasco wants to return in Europe from Cina and go to #EPL. #Arsenal are in advanced talks to sign him from #DalianYifang. He was courted by #Gunners last January, but #Emery opted to sign Denis Suarez on loan, because chinese asked €30M. #transfers #AFC

And now the player himself has suggested talks over his move to his next club are going well, though he did not name Arsenal specifically.

Still, given that the Gunners are the only team really being linked with the former Atletico Madrid wide-man, it seems pretty likely that’s who he means.

“Negotiations are going well,” Carrasco told Sport, as translated by the Daily Star.

“I am aware that I am an important player for the team but I hope they let me leave.

“From a personal and family point of view, I would like to return to Europe.”

While the 25-year-old might look a bit of a gamble after a spell in China, which is a far lower level than most European leagues, Arsenal fans will probably accept this is about the level they’re having to aim for right now.

And in Carrasco they should surely have an upgrade on players like Alex Iwobi and Henrikh Mkhitaryan after poor seasons in 2018/19.