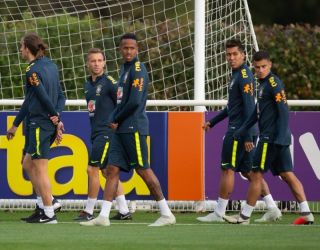 Barcelona midfielder Arthur reportedly faces an anxious wait over a knee injury as Brazil prepare for the start of the Copa America later this week.

Coach Tite has already been dealt a blow as Neymar has been ruled out of the competition due to an ankle injury, as per The Guardian.

In turn, the last thing that he needs is for another key individual to go down with an injury problem, but that’s the issue that he now faces after Arthur picked up a problem in the friendly win over Honduras.

According to Sport, Arthur was forced to come off in the 30th minute on a stretcher, and received further treatment in the dressing room.

It’s noted that while it doesn’t appear as though his participation in the Copa America is in jeopardy, he will still undergo an ultrasound scan on his knee to give a proper diagnosis of the issue that he may have sustained.

With that in mind, Brazil will be hoping that the scan comes back clear to allay all fears of a possible setback, although it’s not ideal for their preparation for the tournament opener on Friday night.

From a Barcelona perspective, they’ll be hoping that it isn’t anything serious that will deal the 22-year-old a blow in terms of his pre-season preparations, as they’ll hope to have him back fully fit and well rested when the squad reconvene later this summer.

For now though, Arthur’s first priority will undoubtedly be to get fit and make his mark in the Copa America, with hosts Brazil looking to get off to a positive start when they take on Bolivia in Sao Paulo.

Three key reasons why Barcelona star has no desire to leave amid exit rumours May 30, 2020 8:52
Juventus