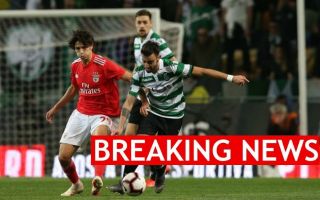 Sporting Lisbon midfielder Bruno Fernandes has explained the circumstances in which he could try to push through a transfer away from the club.

As noted by the Daily Mirror, the Portugal international has been strongly linked with a £70million move to Manchester United this summer, and he’s now sent an encouraging message over his future.

Speaking about his situation after the Nations League final win over the Netherlands, Fernandes said that while he’s not currently trying to leave the club, he could speak to Sporting about being allowed to leave if he receives an offer that he feels he cannot refuse.

‘I know nothing, I will take the next few days to understand what is true,’ the 24-year-old told Sport Mediaset, as translated by the Mirror.

‘We know that newspapers sometimes have to make a show to move the market and sell. I’m calm, I’m at a big club. I don’t need to move, I’m not trying to leave.

‘If the opportunity comes to go to a team that you can’t refuse, I’ll talk to Sporting.’

It remains to be seen if United could be that club, but fans will surely be encouraged as their club should in theory have the money and resources to put in a tempting proposal.

The Red Devils may be a bit of a mess by their own high standards at the moment, but remain one of the biggest names in world football and a club who always bounce back to a certain extent.