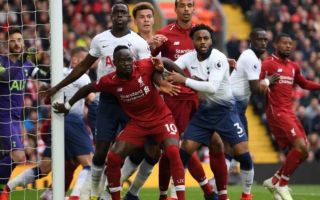 Tottenham left-back Danny Rose has admitted it’s been difficult having to train with Liverpool players with England after the recent Champions League final.

Rose was on the losing side for Spurs against Liverpool in Madrid, with the Reds winning the all-Premier League final 2-0 thanks to goals from Mohamed Salah and Divock Origi.

It must have been psychologically challenging coming up against a Premier League rival in such a big game, and neither side were at their best on the night, though that will ultimately lead to more regret from Tottenham’s end as Liverpool were arguably there for the taking.

Rose says this is not something he’s had to deal with before, and admits that he’s found it a struggle being reminded of his side’s loss in Madrid.

“It is a bit draining having lost last weekend and having to share the camp with Liverpool players. You are reminded every day that you lost the final and that was a unique experience for me,” the defender is quoted by the Daily Mirror.

“I have never been through that myself. I was definitely tired from a long season with my club and having to come to England didn’t help.

England certainly looked a little flat in their Nations League matches, losing 3-1 to the Netherlands in the semi-final and only just beating Switzerland in the third place play off after a penalty shoot-out.