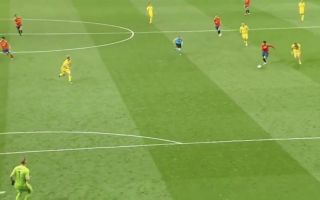 Chelsea striker Alvaro Morata scored from the penalty spot during a 3-0 win for Spain over Sweden on Monday night.

La Roja made light work of their opponents in the Euro 2020 qualifier, with Sergio Ramos opening the scoring from 12 yards in the first half, before allowing Morata to net from the spot himself on 85 minutes.

Mikel Oyarzabal completed the scoring, but Morata will likely steal the headlines for a match-winning moment which saw him embark on a brilliant run from near the half-way line.

The Chelsea outcast, who spent the second half of last season on loan at Atletico Madrid, turned his man superbly before sprinting towards the Swedish box and then drew a clumsy challenge from a defender which prompted the referee to point to the spot.

Morata neatly dispatched his spot-kick to help ensure that Spain earned a comfortable three points in Group F and he might have fired a message to Chelsea fans who have doubted him in the process.

Check out the 26-year-old’s electrifying run and penalty below.