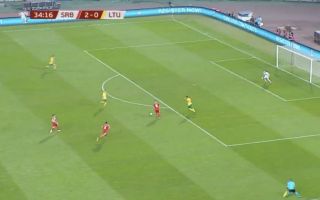 Real Madrid’s newest signing Luka Jovic scored a brilliant goal to give Serbia a 3-0 lead over Lithuania on Monday night.

According to The Guardian, the 21-year-old completed a €65 million switch to Santiago Bernabeu from Eintracht Frankfurt last week, on a six-year contract.

Jovic netted 27 goals across all competitions for Frankfurt last season and he has transferred that form onto the international stage in a European Championships qualifier at the start of the week.

Serbia are currently 3-0 up at home against Lithuania and Jovic has already shown exactly why Real Madrid signed him with a stunning goal after 35 minutes.

The centre-forward picked the ball up on the edge of the box and set himself before firing into the top corner of the net, which is sure to whet the appetite of Blancos supporters ahead of next season.

Jovic just scored this with his weak foot.pic.twitter.com/usnwRRdNzk

Luka Jovic just scored this beautiful goal for Serbia. However, the goal isn’t even the most impressive part. Watching him closely all season his positioning is the closest I have seen to Ronaldo’s. Madrid know exactly what they’re doing by signing him. pic.twitter.com/h9Y0tyLRBI