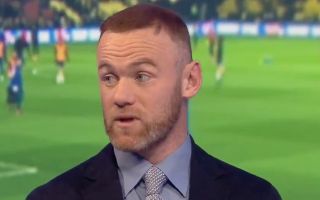 Wayne Rooney has urged former club Man Utd and Ole Gunnar Solskjaer to focus on building a long-term project rather than splashing out on big names.

The Red Devils suffered major disappointment last season as they failed to secure a top-four finish in the Premier League and ended the campaign trophyless.

In turn, they’ll be absent from the Champions League next season and Solskjaer faces a significant task in terms of ensuring that they compete for major honours in the more immediate future.

Rooney though believes that they shouldn’t be looking at big-name signings this summer who will cost a huge amount only for a short-term return, and has instead urged the club and fans to be patient and invest in building a younger squad to compete for the long run.

“For Ole, I think the first thing he’s got to do is try and build the squad,” Rooney told BBC Radio Five Live, as quoted by ESPN. “I don’t think bringing one or two players in for over £100 million is going to really help with the squad and the players who are there.

“I think he needs to try and look at maybe five or six players who have got potential to be top players but you’re not spending £120m-£130m on these players.

“I think you spend £30m-£40m and then try to improve them, which will also give you longevity out of the players and allow you to build a squad around the five or six new players that come in, plus a few of the players who are still there.

“You could bring [Cristiano] Ronaldo, Sergio Ramos and [Lionel] Messi in, or Gareth Bale for instance, and it’s going to cost you £300m-£350m which you’d get what? Maybe two years out of Ronaldo, a couple of years out of Ramos and then you’ve written that money off.”

It’s a sensible strategy in truth as ultimately spending big on a couple of players at a time hasn’t worked out for Man Utd in recent years and the squad lacks the necessary quality and depth needed to compete on multiple fronts.

It appears as though they are on the course set out by Rooney already though, as evidenced by their swoop for Daniel James as per BBC Sport, and so it does appear as though they will look for players with potential and hand them to Solskjaer to improve and build into Man Utd players.