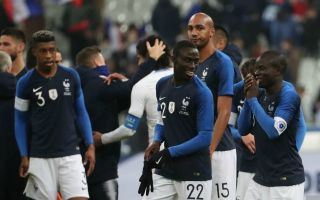 France manager Didier Deschamps has seemed to all but confirm that Lyon left-back Ferland Mendy is set to complete a transfer to Real Madrid.

Spanish outlet AS have reported that Mendy should finalise a €48million move from Lyon to the Bernabeu within the next 48 hours or so, and Deschamps has now spoken about the player and described him as being ‘on the verge’ of the move.

“Two years ago he was playing in the second division, now he is on the verge of joining Real Madrid,” Deschamps was quoted by Marca.

“He has come on leaps and bounds, and he can play on both sides.”

The 24-year-old has enjoyed a remarkable rise in the last couple of years, and his superb displays in Ligue 1 now seem set to earn him a dream move to one of the world’s biggest clubs.

Mendy looks an ideal signing for Real to replace Brazilian veteran Marcelo, who has been a hugely important player for the club, but who cannot go on forever.

If Madrid do succeed in signing Mendy as expected, then they can be reasonably confident of having that left-back slot sorted again for the next five years or more.

It’s been a fine start to the summer for Los Blancos, who have already strengthened well with the signings of Luka Jovic and Eden Hazard.