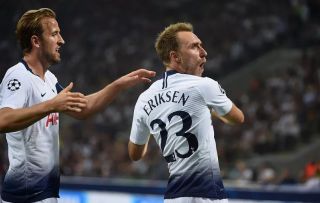 Real Madrid have had a fine start to the summer transfer window with early signings of Eder Militao, Luka Jovic and Eden Hazard, and it seems Tottenham playmaker Christian Eriksen is another of their top targets.

According to Don Balon, the Spanish giants have tried their luck with a formal offer for Eriksen, with Spurs turning down their bid of £74million and holding out for a great deal more – £134m.

The Denmark international would undoubtedly be a fine signing for Real after his world class form in the Premier League down the years, while he also played a key role in helping Tottenham reach their first Champions League final in 2018/19.

Still, Don Balon suggest Madrid are not too keen on paying Spurs’ current asking price, which would be more than they paid for Hazard despite him being in a similar situation at Chelsea.

Like Hazard had been at Stamford Bridge, Eriksen is in the final year of his THFC contract and has more or less confirmed he wants a move this summer.

“I feel that I am a place in my career where I might want to try something new,’ he recently told Ekstra Bladet.