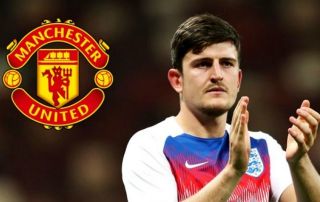 Manchester United may have taken a step closer to clinching the transfer of Harry Maguire as Leicester City look on the verge of signing Lewis Dunk as his replacement.

According to Team Talk, a transfer merry-go-round looks about to take place, with Maguire replaced by Dunk as Brighton also land Portsmouth defender Matt Clarke to replace the departing Dunk.

This should free up Maguire to join Man Utd after plenty of speculation linking the England international with the Red Devils in recent times.

Manchester City, however, are also in the market for a top centre-back to replace the departing Vincent Kompany, and Maguire has been linked with them too.

Still, United urgently need a quality CB signing to come in as an upgrade on flops like Chris Smalling and Phil Jones, with other big names like Matthijs de Ligt and Kalidou Koulibaly looking unrealistic at this point.

Dunk should also prove a fine signing for Leicester in a deal worth around £30million, with other Premier League sides also recently linked with him.

It’s going to be a difficult season for Brighton, however, who only narrowly avoided relegation last term and who are now set to lose one of their most important players.