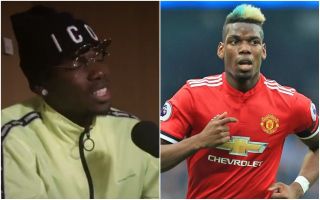 Manchester United midfielder Paul Pogba has explained why he dyed his hair blue just before a game with Manchester City.

The France international ended up scoring twice in a 3-2 win for the Red Devils at the Etihad Stadium, but he certainly raised a few eyebrows with his choice of hairdo for that game.

Pogba: “The blue haircut? It was for the national team. What did people think? That I wanted City to win? I scored two goals and I was really happy City didn’t win against us. People have their own judgement and have you have to accept this.” #mufc [Times] pic.twitter.com/6qJtIqDw0C

However, speaking about it now, Pogba says he went for the colour blue because of the colours of the French national team.

The 26-year-old certainly has to put up with a slightly unnecessary obsession with his style and other off-the-pitch activities, but he shrugs it off well in the interview above, mocking the idea that he could possibly have been cheering for City just because of the colour of his hair.