Manchester United have identified Ajax goalkeeper Andre Onana as their number one choice to replace David de Gea this summer.

The Spanish shot-stopper has only one year remaining on his current deal at Old Trafford and according to The Independent, Paris Saint Germain and Juventus are interested in his services.

The Red Devils could decide to cash in on a prized asset this summer, with talks over a possible extension hitting a wall over the last few months.

The Independent reports that United are poised to launch a £40 million bid for Ajax star Onana, who is the club’s priority target in the event De Gea ends up leaving the club.

Atletico Madrid shot-stopper Jan Oblak has been heavily linked with a switch to Manchester, but the Premier League outfit has reportedly been put off by his hefty buy-out clause – which is in excess of £100 million.

United are looking to strengthen in a number of areas while the market is open, which is why funds must be distributed evenly, with younger talent taking precedent over marquee names.

Onana is already one of Europe’s finest ‘keepers at just 23-years-old and he was fantastic during Ajax’s stellar 2018-19 campaign. 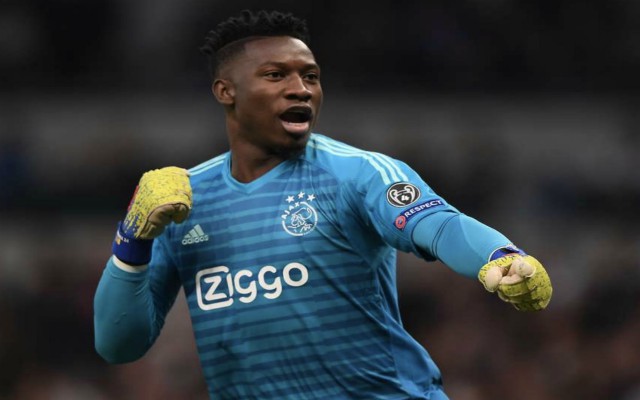 The Cameroon international was ever present as the Dutch giants won a domestic double and reached the semi-finals of the Champions League, impressing with his strong presence between the sticks.

The Red Devils have been overly reliant on De Gea for many years now, but his form dropped off towards the end of last season amid uncertainty over his future.

The time may be right for United to bring in a new number one and Onana has the potential to reach the very highest level in the coming years.

If De Gea is indeed sold while the market is open, fans can expect the Ajax shot-stopper to fill his gloves at the Theatre of Dreams swiftly and at a bargain fee for a player with his quality and experience.