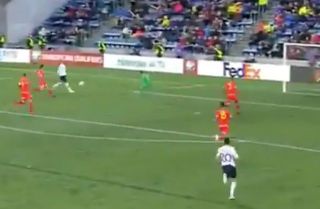 Kylian Mbappe wasted little time in giving France the lead against Andorra on Tuesday, but he did so in some style with a wonderful finish.

After suffering defeat to Turkey last time out in their Group H qualification clash for Euro 2020, the pressure was on the reigning World Champions to bounce back.

With that in mind, Mbappe gave them the perfect start as he latched onto a through ball and showed great composure to dink the ball over the onrushing goalkeeper to break the deadlock.

As seen in the tweet below, it also brought up an impressive personal landmark for the Paris Saint-Germain superstar, as that was his 100th career goal and it has come in just 180 games which goes to show just how talented the 20-year-old is.

With his entire career still ahead of him, there will no doubt be plenty more goals on the way and personal accolades to boot as he continues to shine for club and country.