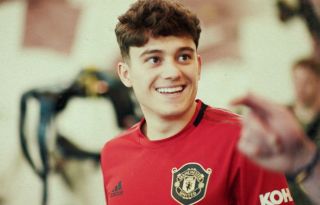 Manchester United’s new signing Daniel James has explained why he made the move from Swansea City to Old Trafford this summer.

The Wales international has just been confirmed as the first signing of the summer for the Red Devils, and the first made by Ole Gunnar Solskjaer since he took over as manager.

James looks an exciting prospect after catching the eye in the Championship, and he’s explained that he feels the move to MUFC is the perfect one for his development.

‘This is one of the best days of my life and a challenge I am really looking forward to,’ he told the club’s official site.

‘The Premier League is the best league in the world and Manchester United is the perfect place for me to continue to develop as a player.’

It’s certainly true that United have something of a history of trusting young talent and getting the best out of young British players, whether raised from their academy or signed from elsewhere.

James will no doubt be aware of another Welshman, Ryan Giggs, who became a Man Utd legend after making his breakthrough at the club as a youngster.

Solskjaer also spoke about the signing of the 21-year-old and why he’s confident he can be a success with the club.

‘He had a great season with Swansea City and has all the attributes needed to become a Manchester United player.’