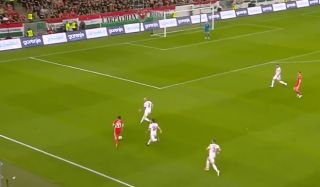 Daniel James is all but a Manchester United player after agreeing a transfer from Swansea City this summer, at least ‘in principle’, according to the Red Devils’ official site.

The 21-year-old certainly looks a real talent, with some Man Utd fans posting on Reddit about how good he looked in action for Wales with this pacey and skilful run forward to create a scoring opportunity.

Here’s the video above, with James showing why he’s rated so highly, and looking like his natural speed will make him a real threat to most Premier League defences next season.

“Jesus he’s a rocket,” said one fan commenting on the post.

“His acceleration is frightening,” said another.

Daniel James is actually a bit of a baller, not just a pace merchant, really has good control of the ball when running at pace

I've come around. Daniel James is the best thing since sliced bread.

Apart from running like a man chased by a swarm of bees, he can also play with his left and right foot. ? #danieljames #MUFC ?

Daniel James is rapid. Can't wait to see him explode with that pace in the premier league. ?