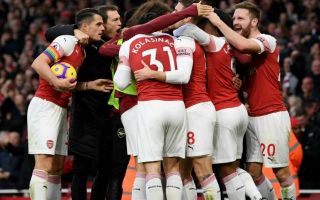 Arsenal are reportedly preparing to bid for Bournemouth winger Ryan Fraser this summer as he’s admitted to friends that he wants a transfer to the Emirates Stadium.

The Scotland international had a hugely impressive 2018/19, contributing seven goals and 14 assists to their Premier League campaign – making him the second best creator in the top flight, behind only Eden Hazard on 15 assists.

There’s no doubt Arsenal could do with that kind of quality in their squad next season after below-par campaigns from the likes of Alex Iwobi and Henrikh Mkhitaryan.

And according to Football Insider, things may be looking good from a Gunners point of view as Fraser is seemingly eager to get the move to north London.

The report suggests around £20million will be required from Arsenal to sign Fraser, who is in the final year of his contract with Bournemouth.

That could well make the 25-year-old one of the bargains of the summer if AFC can get the deal done.

As the tweet below shows, they’re also being strongly linked with Belgian wide-man Yannick Carrasco in that position, so it remains to be seen if they can bring in both…

??????? News about #Carrasco: there’s an agreement between the belgian and #Arsenal. Gunners are dealing with #DalianYifang and they’re very close to finding an agreement for about 30 million + bonuses. Updates will follow.