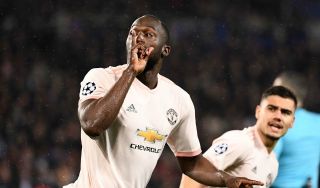 Speaking to Premium Sport, as quoted by Calciomercato, after playing for Belgium, Lukaku made it perfectly clear that he’d made a decision on his future but did not want to expand on that as he was still contracted to Man Utd.

However, given that he heaped praise on Inter Milan’s new manager Antonio Conte, saying he was glad they’d appointed him, and also adding that he expects a busy summer as his agent is set to meet with United, whilst also praising the quality of Serie A, it’s very clear he’s surely looking to leave Old Trafford and that the San Siro is the destination he has in mind.

‘It’s good to see Conte joined Inter, for me he is the best manager in the world. I’ve already taken a decision about the future but I can’t reveal it because I have a contract with Manchester United and because I respect the club,’ Lukaku said.

‘I am a big fan of Serie A, who knows me is aware that I wanted to play in the Premier League and that I also want to play in Serie A.

‘Cristiano Ronaldo arrived in Italy last season, Sarri will go to Juve, Ancelotti is at Naples, the Serie A will be thrilling next season.

‘My agent will speak with Manchester United. I’ve already taken my decision. The club need to decide but my agent wants the best for me, I am sure it’ll be a busy summer.’

Lukaku only joined United two years ago from Everton, but it’s fair to say things haven’t really worked out for him there.

Inter could be a fine move for the 26-year-old, with the slower pace of the game perhaps better suited to his style of play.

Conte, formerly of Chelsea, is also known for his use of tall, strong target men in the mould of Lukaku, who the two should be a good tactical fit.