Manchester United striker Romelu Lukaku has given a pretty big hint that he’s planning to try to engineer a transfer away from the club this summer.

The Belgium international fell out of favour at Old Trafford towards the end of last season and it makes sense that he might now feel like moving on after a difficult two years in Manchester.

Lukaku has not really lived up to expectations in a red shirt, despite being one of the Premier League’s best strikers in his time with previous club Everton.

Gazzetta dello Sport have been among the sources to link the 26-year-old with Inter Milan, while this screen-grab of the paper also shows him being linked with Napoli: 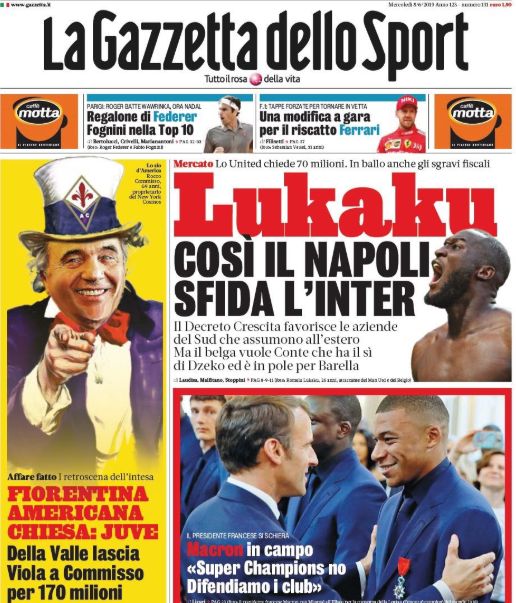 Speaking about his future, Lukaku has been quoted as saying he expects a busy summer now and that he’s planning to talk with his club and with his agent.

All this surely points towards steps being taken to quit Man Utd, in what probably seems the best solution for all involved.

“I have a contract with Man United. I’ll speak with my club and my agent Federico Pastorello to make the best decision. I am going to enjoy my holidays with my family now. I know what I’ll do, but won’t say it. We’ll see. If I expect a busy summer? Yes.”#mufc pic.twitter.com/z9R0fnLIzI

Chelsea could interfere with Barcelona’s move for superstar who have been working on a deal since February
May 16 2022, 15:42
Chelsea FC
Opinion: Chelsea’s new owners must pounce as ideal transfer target becomes available for bargain €60m
May 16 2022, 14:30
Chelsea FC
Why has such a promising season gone so wrong for Chelsea?
May 15 2022, 10:20
Liverpool FC
Romelu Lukaku hits back at his own agent following comments made about Chelsea and future
May 13 2022, 17:10
Chelsea FC
(Video) Romelu Lukaku scores Chelsea’s third vs. Leeds United
May 11 2022, 21:23
Chelsea FC
Chelsea star plans crunch talks with Tuchel but is tipped to struggle to “heal” wounds at Stamford Bridge
May 9 2022, 12:16
Chelsea FC
Premier League team of the week: Improved Arsenal and Chelsea stars make BBC XI
May 9 2022, 7:08
Tottenham FC
Exclusive Fabrizio Romano column: Pogba open to Man City transfer, Lukaku planning talks over Chelsea future, and Arsenal’s midfield targets
May 9 2022, 7:00
Chelsea FC
Chelsea criticised for failing to get the best out of expensive signing
May 8 2022, 7:56
Chelsea FC
Video: Lukaku bags brace for Chelsea after failing to score a league goal this year
May 7 2022, 16:25
Chelsea FC