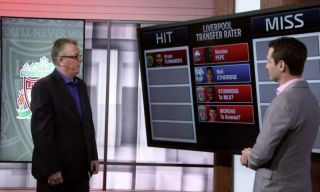 Liverpool legend Steve Nicol has bizarrely suggested that his old club should not be in the market for the transfer of Lille star Nicolas Pepe this summer.

The Ivory Coast international just had a superb season to attract rumoured interest from a host of Europe’s top clubs, but Nicol doesn’t rate Ligue 1 so thinks Liverpool should stay away.

Watch Nicol go through a number of Liverpool transfer stories in the video clip above with ESPN, as he for some reason writes off Pepe but then goes on to recommend Cardiff City goalkeeper Neil Etheridge, albeit as a backup player.

Still, we think there’s a decent argument for saying if LFC want to catch Manchester City next season, they’ll need all the help they can get, with Pep Guardiola sure to have plenty to spend as usual.

And while an attacking player might not be a priority, Pepe could be useful if Mohamed Salah goes through another dry spell as he did at points in 2018/19.