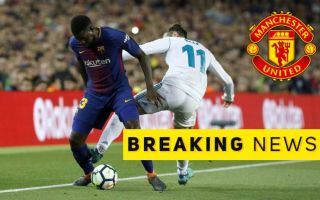 Manchester United have reportedly made contact with Barcelona to ask about the potential transfer of defender Samuel Umtiti this summer.

A snippet from the print edition of Sport, as translated by Sport Witness, claims Man Utd have made an approach over Umtiti as his future could be in doubt if Barcelona sign Ajax centre-back Matthijs de Ligt.

MORE: Why Solskjaer is eager to spend big on replacing Mourinho signing at Manchester United

As Sport Witness note, United have also been linked with De Ligt this summer and there’s no doubt they could do with a new signing in defence.

While Umtiti has had his problems with fitness and form recently, he’s previously shown himself to be one of the top players in Europe in his position.

The Daily Mail have linked the France international as a target for Arsenal recently, while Don Balon reported that he could also be a £70million target for Juventus.

It may be worth MUFC getting involved in the running to sign Umtiti, as other options look increasingly difficult or expensive for them to push through.

The Independent have suggested Paris Saint-Germain are looking the favourites to beat United and others to De Ligt, while the Telegraph mention links with Leicester City’s Harry Maguire, though he could cost as much as £80m.

United would surely be better placed than someone like Arsenal to offer the kind of money Barca would want for Umtiti, and could also be a more attractive destination for the player, despite both clubs missing out on Champions League qualification last season.