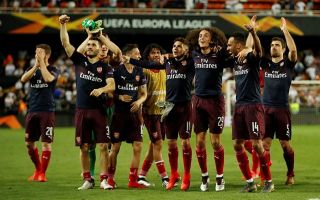 Arsenal fans might be a bit worried to see midfielder Lucas Torreira complaining so much about life in London and admitting he misses Italy.

The Uruguay international only joined the Gunners from Sampdoria last summer, and looked very promising in his first season in the Premier League.

However, Torreira has apparently emerged as a transfer target for AC Milan this year, according to Tuttomercatoweb, and his thoughts on England suggest he might jump at the chance to make a move to the San Siro.

“I don’t know if there’s a lot of things that I’m enjoying because I think I liked living in Italy more,” he said in a press conference, as quoted by Goal.

“London is a completely different world. England is a very big country.

“I had trouble with the language, communicating with my team-mates and with the people. It’s pretty rough in certain moments when you can’t have any dialogue, that’s the most important part.”

Torreira also suggested that the lack of sunshine in England had also not helped when it came to making the transition from the north-west of Italy to north London.

He did, though, admit that he believes he could get used to the climate, suggesting he is not thinking about an Arsenal exit quite yet.

“The weather is also difficult,” Torreira added. “You go out in the morning and it’s cloudy and you get back after training and it’s still cloudy.

“I miss the sun. Mostly us South Americans are used to having sunny days. But I think I’ll get used to it as the years go by.”

Arsenal fans will hope the 23-year-old can be persuaded to stay at the Emirates Stadium, with many of the world’s best players sometimes taking time to settle in with new clubs and adjust to new surroundings.

Torreira certainly seems like he could have a very bright future with Arsenal if he carries on as he has, and they could really do without having to sign another new midfielder this summer as their squad already looks in need of so much work.