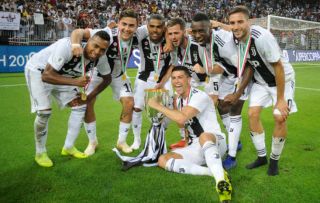 Manchester United have reportedly discussed a possible deal to beat Manchester City to the transfer of Juventus full-back Joao Cancelo.

According to Sky Sport Italia, the versatile Portugal international’s name came up in discussions between Man Utd and Juve in the club’s London offices this week as the Serie A giants work on re-signing Paul Pogba.

Cancelo was only recently reported to be closing in on a transfer to United’s arch rivals City for around £44million, according to Sport Mediaset.

However, it may now be that United have a chance to snap up Cancelo, with Sky Sport Italia explaining that City’s pursuit of the 25-year-old is cooling for a variety of reasons.

If the Red Devils can land Cancelo as part of a deal for Pogba, it could end up being a decent move, with the former Valencia man capable of playing right-back, left-back, wing-back on either side, or even wide in midfield and up front.

Cancelo played all those roles at various points for Juventus last season, even if he is primarily a right-back, so could therefore be an ideal replacement for Antonio Valencia.

This could be a blow for City, however, who also look in need of improving in that area as Cancelo would arguably be an upgrade on the likes of Kyle Walker, Danilo and Benjamin Mendy.

Video: Joao Cancelo scores for Man City with brilliant weak-foot strike from outside the box against Olympiacos Nov 3 2020, 22:08
Manchester City

Barcelona hope a straight swap deal with Man City will help them sign a second player from Pep Guardiola’s side Jul 23 2020, 0:46
Manchester City