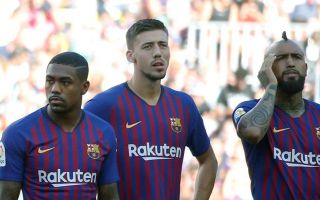 Arsenal are reportedly one of the clubs in frequent contact with Barcelona over the transfer of struggling Brazilian winger Malcom.

The Gunners seem to face competition from their north London rivals Tottenham in the running to sign Malcom, whose agent will be in Barcelona next week to discuss the player’s future, according to Mundo Deportivo.

Arsenal fans will surely be hoping this move can come off, with Malcom looking a serious talent during his time at previous club Bordeaux.

There’s no doubt the 22-year-old has struggled since joining Barcelona last summer, but it looks too soon to write him off as many big names sometimes have difficult spells if they’re not in the right set-up or working under the right manager.

Malcom might be a better fit at Arsenal, where he would certainly get more playing time at least, having faced plenty of competition for an attacking spot in Ernesto Valverde’s side.

Arsenal desperately need upgrades on the likes of Alex Iwobi and Henrikh Mkhitaryan, and Malcom could well be that if he can rediscover his best form at the Emirates Stadium.

Still, if Tottenham are interested he could well be more tempted to move there and play in the Champions League, with Arsenal no longer the top dogs in north London.