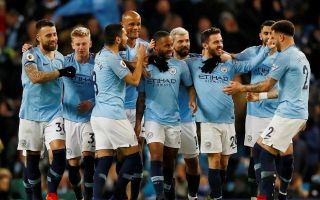 Man City will begin the defence of their Premier League crown on August 10 when they face West Ham United in the English capital.

Pep Guardiola led his side to a brilliant title win last year, fending off Liverpool right up until the last day of the season to secure back-to-back title successes.

The Spanish tactician will be back to add a third this coming season, and so his players will have to show the same level of determination and commitment to avoid letting their standards slip and allow their rivals to leapfrog them in the standings.

Their meeting with Liverpool on January 3 last season was key in turning the tide, as not only did it close the gap on Jurgen Klopp’s men at the time and force them into a dip in form, but it ended a poor run of results over the festive period for City and sparked an incredible run of 18 wins in their last 19 league games.

In addition, they also sealed the FA Cup and League Cup in a domestic treble, and so the showdowns with the Merseyside giants this coming season will be seen as equally important to the outcome of the campaign as a whole as both are widely regarded as the favourites for the title again this season given the strength of their respective squads.

City travel to Anfield for the first meeting on November 9, while they host their rivals on April 4 in what could be a decisive clash at the Etihad with only a handful of games remaining thereafter.

In turn, those will be the stand-out dates for many fans along with the derby clashes with Man Utd, as it remains to be seen if Man City can continue to set an incredibly high standard in the English top flight and continue to dominate domestically.

Naturally though, having fallen short in their bid to win the Champions League again, that will undoubtedly be a key priority for Guardiola too as they must transfer their success at home onto the European stage at some point too to be considered one of the top teams in the game.

For now though, with the fixture list being released, the focus will switch to what should be another pulsating tussle with Liverpool next season.