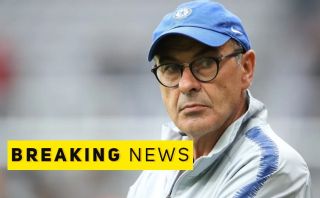 Reports in Italy are claiming tonight that Maurizio Sarri’s move from Chelsea to Juventus has been agreed, with Frank Lampard set to be the Italian’s replacement at Stamford Bridge.

According to Gianluca Di Marzio, the deal was finalised in a meeting in London between Juve chief Fabio Paratici and Chelsea’s Marina Granovskaia.

Chelsea are said to have asked the Serie A champions for a bit more time before signing off the deal due to their need to bring in a replacement, which will apparently be Lampard.

The Derby County boss has only one season of experience in management, having taken the Rams to the Championship playoff final in 2018/19.

Still, Lampard is a club legend at Chelsea and seems a good candidate to come in after a difficult season under Sarri.

The former Napoli manager’s playing style never really seemed that good a fit for this Blues side, despite eventually guiding them to a third-place finish in the Premier League and a Europa League final win.

Sarri remains highly regarded in his native Italy, however, and now looks set to take charge of his home country’s dominant club in Juventus.

The Turin giants have won the last eight titles in a row under first Antonio Conte and then Massimiliano Allegri, who left at the end of last season.