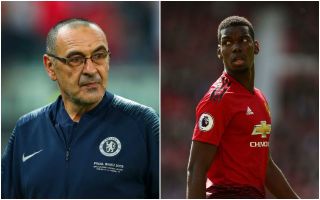 Maurizio Sarri is reportedly set to land some world class talent in the transfer market after agreeing to leave Chelsea to take over as Juventus manager.

The Italian tactician looks all set to be announced as the new Juve boss this week, with Frank Lampard expected to replace him as Blues manager.

And according to reports from Sky Sport Italia, Juventus are set to follow this big move up with signings of Manchester United midfielder Paul Pogba and Fiorentina winger Federico Chiesa.

Juventus are working on deals for Pogba and Chiesa. They also want to sign a striker reports @SkySport

Pogba has been strongly linked with a return to Turin this summer, but is also known to be a top target for Real Madrid as well after a difficult spell at Man Utd.

It will be interesting to see how Sarri’s appointment influences the France international, who seems like he could be a perfect fit for the former Napoli boss’ style of play.

Chiesa, meanwhile, has also been linked with a number of top clubs after shining in Serie A, with Chelsea one of the clubs Sarri could beat to the 21-year-old forward’s signature.

Reports earlier today have linked Chiesa with both Chelsea and Liverpool for around €80million, but if he follows Sarri and possibly Pogba to Juve they’ll have a hell of a team next season.